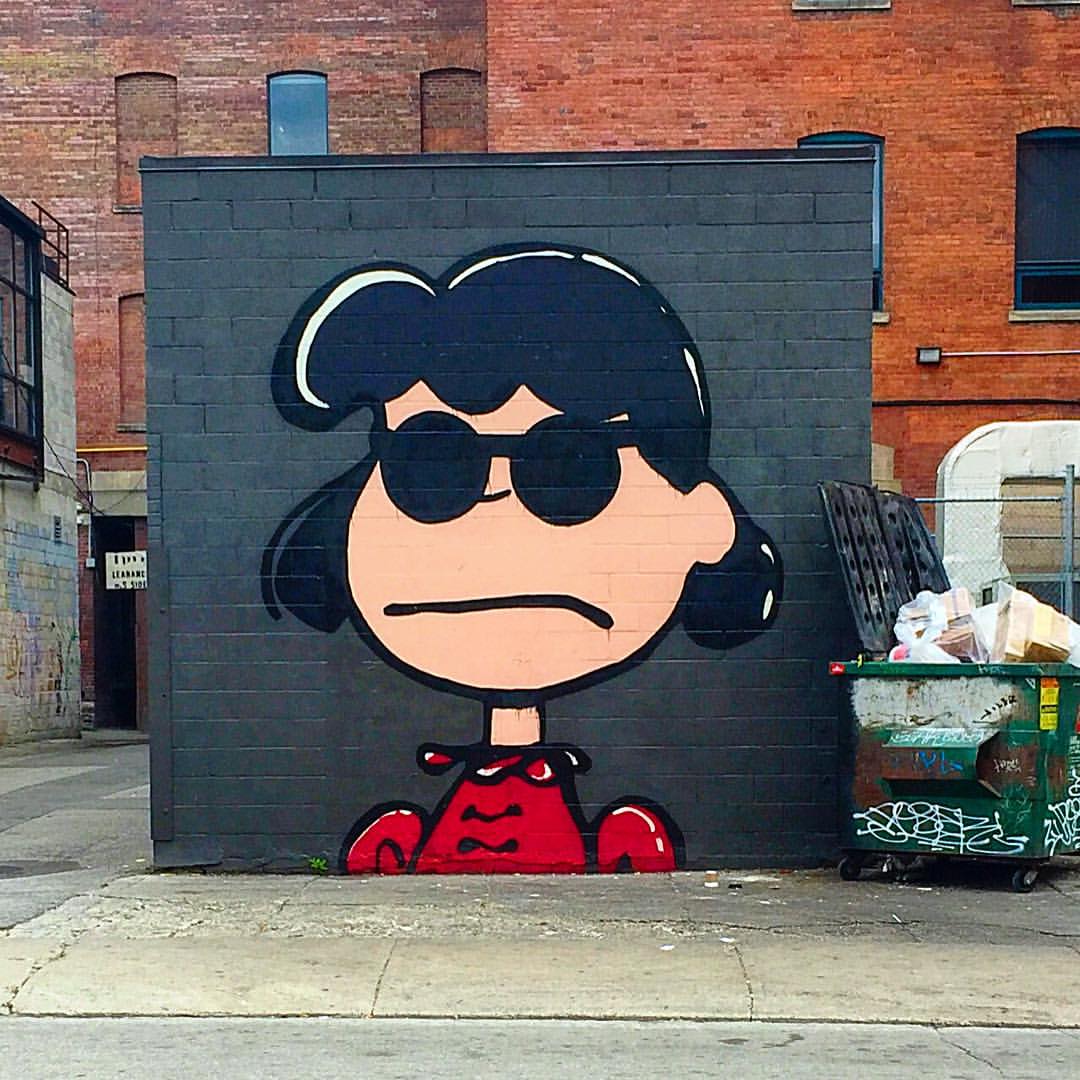 Lucy is not pleased. 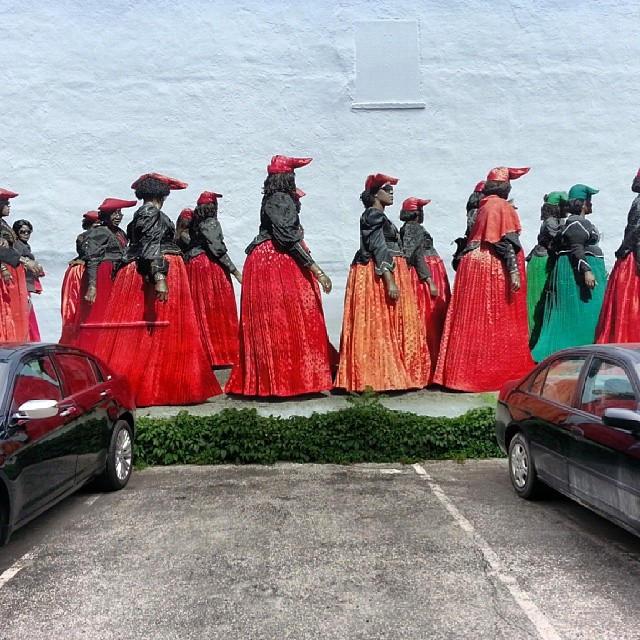 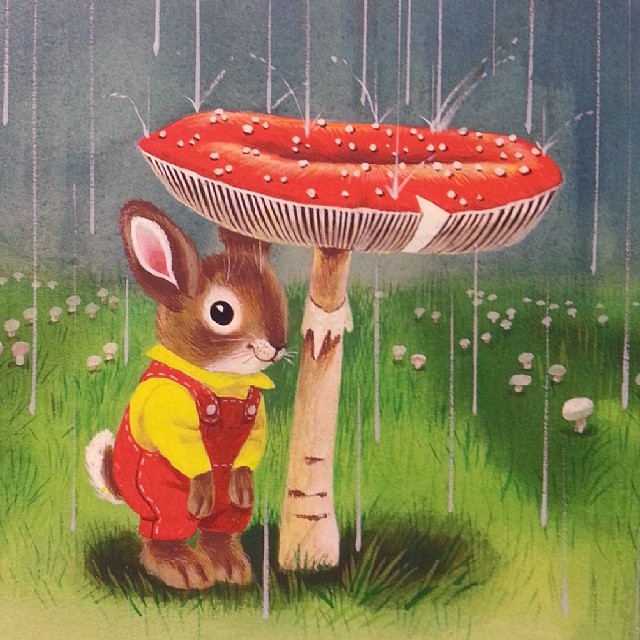 A couple weeks ago, when I was sick, my daughter read to me from one of her old books, I am a Bunny. Worked ten times better than chicken noodle soup.

A heavily tweaked version of a photo I took near Church and Shuter in Toronto.

All mediums of creative expression follow the same kind of cycles, broadly speaking. Pioneers explore some aspect of the medium, laying down the initial rules and setting the early templates. This is followed by a round of improvements and tweaks, where rules are adjusted and extended. Competition drives up quality, richness and complexity explode. Talented individuals and groups dominate their medium and begin to explore it’s edges, pushing boundaries and challenging audiences. Before long, burn out and fatigue sets in, especially among the creators. The conversation turns inward, as do the jokes and references. Complexity reaches a breaking point, where appreciating the latest artistic expressions requires years of study.

Sometimes the medium ossifies (as in The Opera). Other times the creators — now bored, restless, worn out or lazy — blow up the medium, overthrowing old rules and patterns. Quality gives way to novelty, constructing rich artworks is replaced with a rush to deconstruct previous assumptions. Counter-reactionary elements try to hold the core, but their efforts, however popular, seem trite, insipid, the application of talent to cynical exploitations of nostalgia (see Kinkade, or trace the whole story from early Beatles to late Beatles to Yoko Ono to Wings).

Eventually, a new round of innovation begins, sometimes in the guise of a return to past ideas of quality, now updated to include the latest technologies and techniques. Other times innovation emerges as meticulous attention to detail fuses with unlimited imagination, accepted patterns expand to subsume populist elements in ironic or post-ironic fashion (see Mark Ryden and the Lowbrow art movement or an old article I wrote about post-irony).

Architecture, especially big expensive public architecture, has the least room to hide, and is the most susceptible to rot as familiarity and iconic status elevate dreck and schlock into warm fuzzy feelings through the magic of nostalgia (as in the CN Tower, or local “landmark” Honest Ed’s). This drives architects to experiment with novel forms on the assumption that distinctive designs will come to be accepted over time, independent of quality and foresight (see my post about the Royal Ontario Museum). Other times, these forms become instant classics, fusing great design with extraordinary presence, redefining the rules at a higher level of innovation, as is the case with Ai Weiwei’s “Bird’s Nest” stadium, or Frank Gehry’s masterful addition to the Art Gallery of Ontario, show in the photo above.

“If you look out your windows you will see
Many ruined cities and enduring seas
But if you wish to sleep please close the blinds.”
-Gwendolyn MacEwen, high priestess of middlebrow emo poetry, insipid spiritualism, and conventionally structured verse. 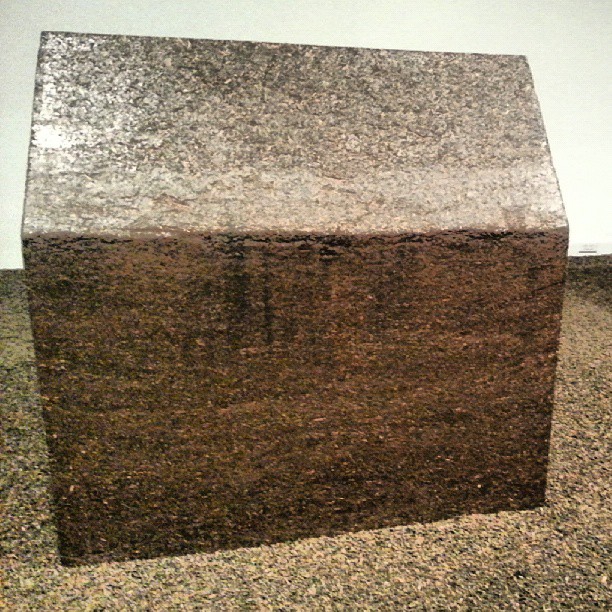 Finally saw the Ai Weiwei exhibit at the AGO. It’s small, if I’d had to pay for it separately, instead of with my regular membership, I would have felt cheated. Instead I felt mildly entertained, then slightly nauseated. I shouldn’t have been surprised at how carefully Weiwei was packaged up as Dissident Artist. That should have been clear from the giant posters showing his oversized body, arms crossed, beard defiant. But even so, the psycographic distance between Weiwei’s dangerous effort to uncover the list of kids who died in the Sichuan earthquake, and the giant wall covered with a reproduction of the list of names, situated a couple dozen feet from the gift shop selling colored plastic Chinese symbols and AW inspired pins, was almost enough to make me hurl.

To be clear, I don’t think that art needs to be removed from commerce to remain worthy. But courageous dissent about thousands of dead schoolkids and $3 pins occupy different spaces, in my own mind at least. For art to work as experience – and the impact of AW’s oversized works relies entirely on the experience of being in their presence – this experience has to pull you in to a different reality, something other than a relaxed state of mild stimulation that accompanies a pleasant walk through an exhibit of well crafted bicycle sculptures.

Art as experience works when it takes you outside of yourself, when it pierces the membrane between your perception and the artifact you perceive. If you ever get the chance, go see Picasso’s Celestina, painted before he fragmented his prodigious talents into periods of thematic deconstruction. Stare into the woman’s uneven eyes until you’re afraid you might not be able to pull back, until the woman’s essence floats off the canvas and lodges itself into your brain.

This is Art as Experience, and it bears the same relationship to Art as Commodity as travel does to tourism. The central problem with the Ai Weiwei exhibit is that it thwarts experience at every moment, and fills in the space with co-branding (AW & AGO 2gether 4ever!), video screens (to distract from the dearth of original artwork) and merchandising opportunities.

There is no there there, man.

This is a tree with light bulbs. It’s part of Nuite Blanche in Toronto. Perhaps the most damning observation about this city is that the most drab, uninspired art festival draws such a large crowd that it’s nearly un-navigable. Don’t get me wrong, some of the exhibits, including the light bulb tree, are pretty. Or well executed. But they’re all bland. Pointless. Timid beyond even the worst corporate art placed in the lobby of an insurance firm.

How about those bicycles you could pedal to generate electricity? Only a 30 minute wait, and you get to participate in a profound display of our difficult relationship with the earth. Or something. So clever and thoughtful! Imagine the tortured artistic visionary and his long struggle to convince Scotiabank, the festival sponsor, to include his daring creation.

My advice: use your peddling power to shine your bike light in the opposite direction from the Nuite Blanche exhibits.

John Brasio’s State of the Union

Not much posting busy working on illustrations for a novel. I can share these red, tasteless berries.