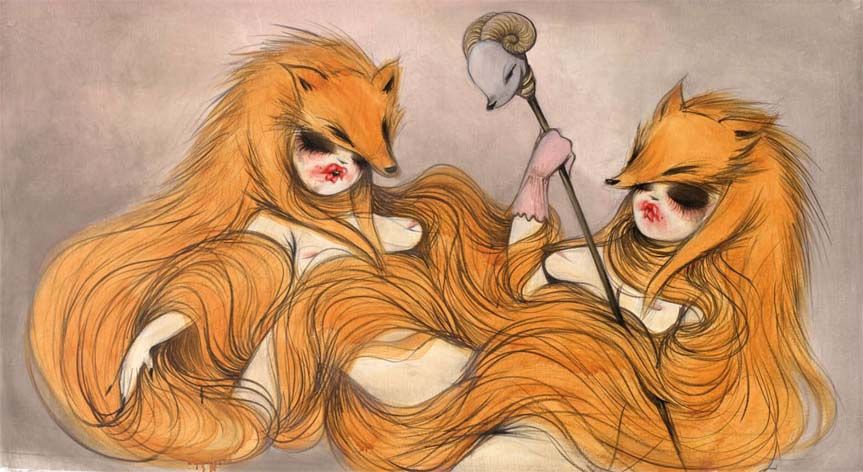 Shown above is a painting from the show “Atame” by French artist Miss Van. If it looks a lot like other paintings by Miss Van that’s because it is. Some artists achieve fame by fluke, others achieve fame through extraordinary talent and effort. A significant number of others are recognized because they are recognizable. Keep doing artwork in the same quirky, easily distinguished style over and over and there’s a good chance that sooner or later you will become famous, irrespective of the merit of your works. 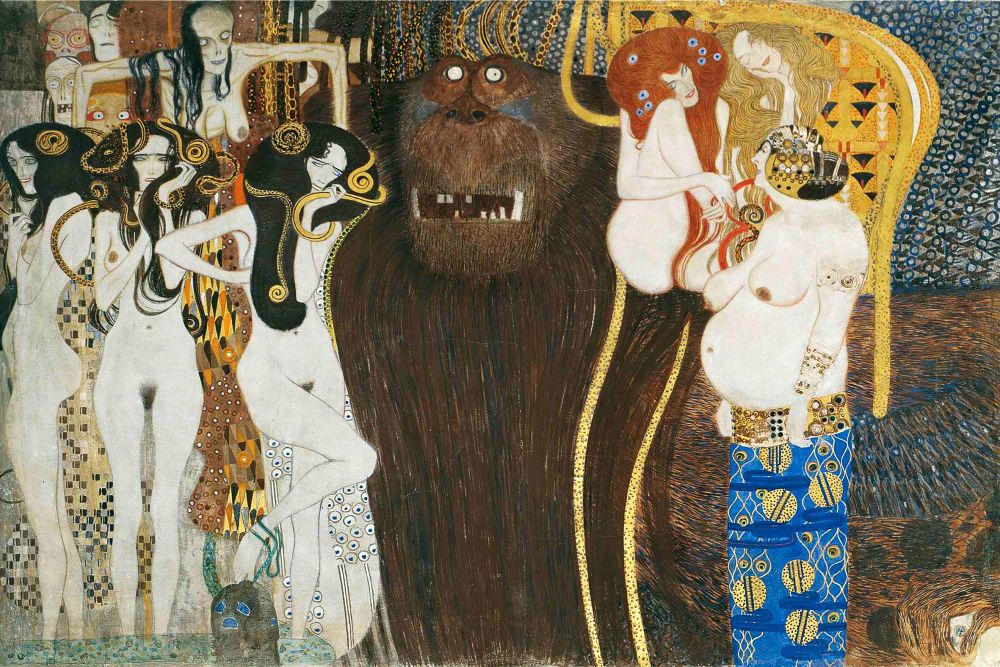 Is love more intense when it’s mixed with revulsion? Is beauty more captivating when it’s shadowed by decay? There exists a persistent theme throughout art: that beauty is a facade, that behind the seductress lurks a monster, tempting us to death and ruin. In the most captivating moment from the “Lord of the Rings” film trilogy, Frodo and Sam are crossing The Dead Marshes, led on by Gollum. Little torches coming out of the bog mark the bodies of dead warriors. Gollum warns his companions not to follow the lights, but Frodo is entranced, falls in and is pulled under by zombies. The scariest part isn’t that he gets pulled under against his will, it’s how his will is bent until he longs to go under. The beauty of the flames is enchanting, disarming; how compelling it must feel to hear the piper for eternal bliss, to just let go and ignore the horror beneath the surface.
Shown above, “Beethoven Frieze” by Gustav Klimt. 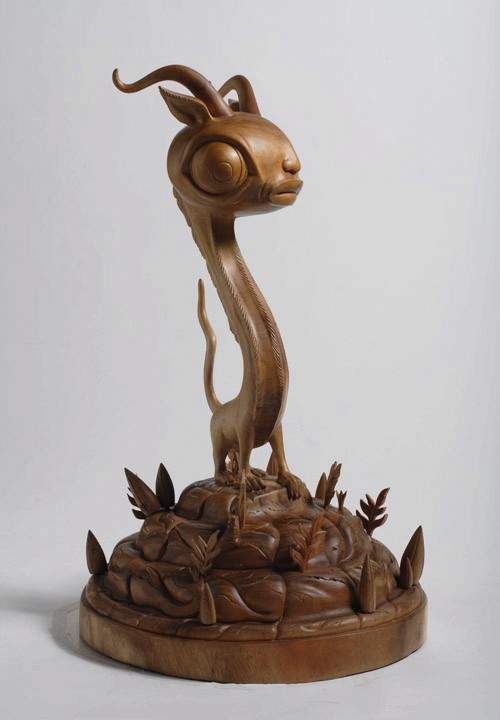 A wooden sculpture by Scott Musgrove. 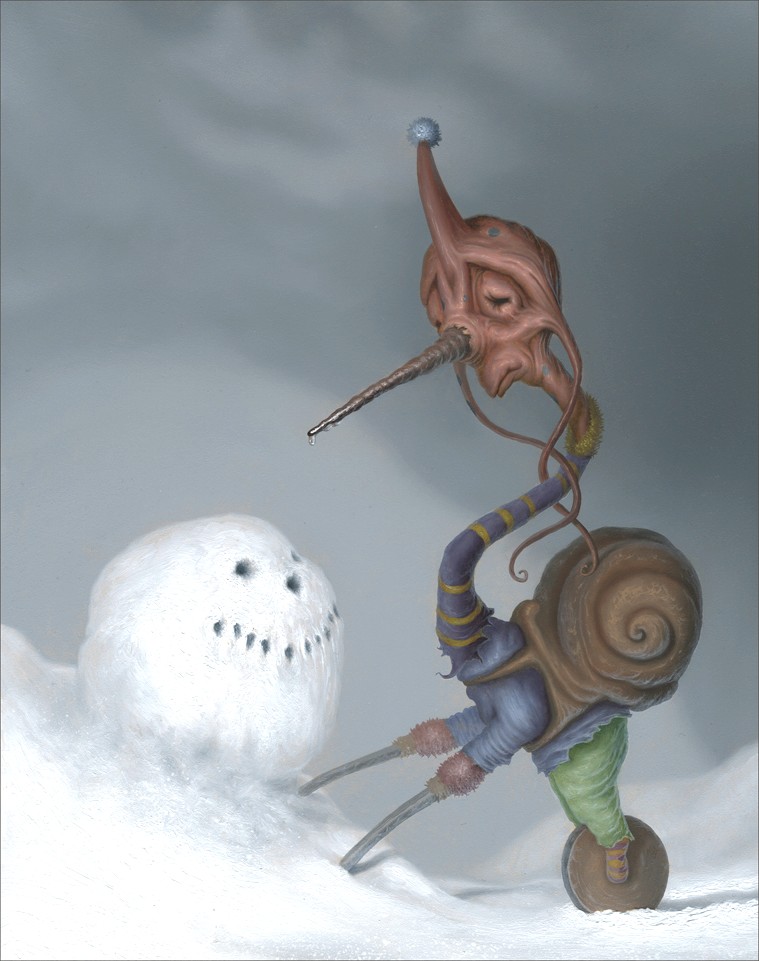 Shown above is “Sniftor’s Snowmate”, by Matt Dangler. For his show “Searching for Satori”, Dangler created a world of exotic creatures posed in front of pale, lonely backgrounds. The resulting images could be stills from a film version of a previously undiscovered work by Dr. Seuss at his most melancholic of moments. 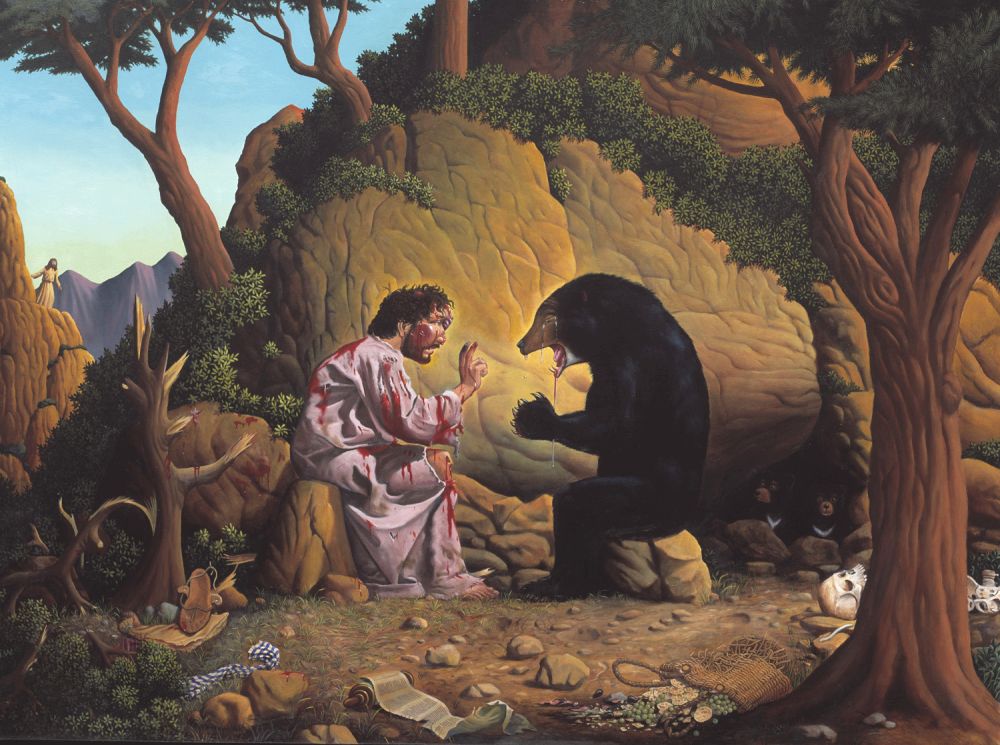 by Jim Woodring. Make sure to click image for a larger view. 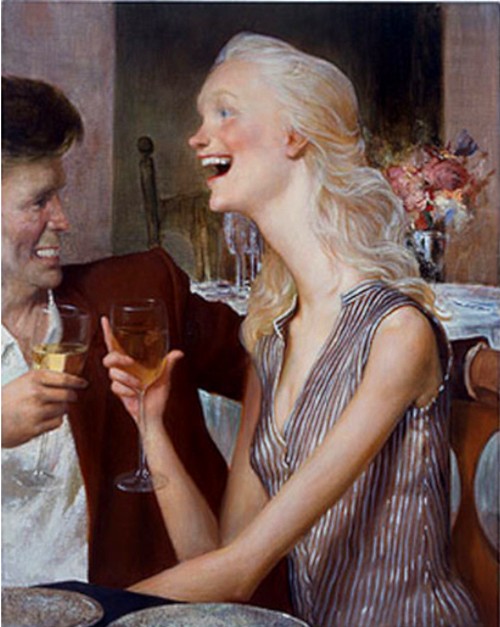 Somewhere, buried deep within our brains, is a huge pull towards recognizing things as human. We see a crater with a line and some rock piles on mars and immediately the face is apparent to us. We love cartoon animals that act like humans: expressing love, fear, excitement and playfulness. These animals don’t have to look realistic to be compelling, just like we can fall in love with Betty Rubble, even if her proportions are far from correct. Our brains are able to understand her drawing as a caricature, a suggestion of what a human being might be like. The red perky lips, the alluring smile, the short dress. There’s an entire genre of cartooning which places the 2D characters from “The Simpsons” and “Futurama” into erotic poses so pleasurable to look at that websites can hide the full collections behind pay walls…
END_OF_DOCUMENT_TOKEN_TO_BE_REPLACED 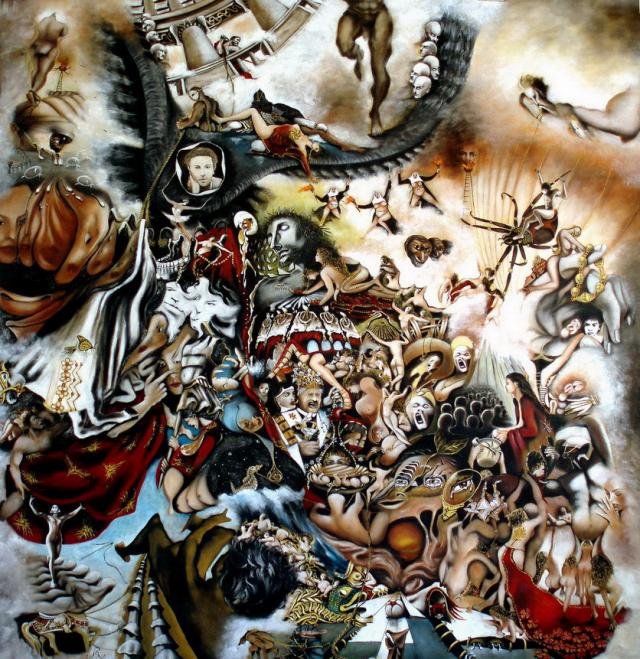 I’m tempted to dismiss Shahla Rosa’s paintings as sloppy, drippy knock-offs of Dalí or Chagall, populated with a grab-bag of melted human forms and generic symbols. But there are times when I suspect the internet just isn’t doing justice to an artist’s work, especially a monster-sized homage like “The Triumph of André Breton and Surrealism”, which measures 6-feet in width and just a bit more in height. So instead of attacking her paintings I’ll leave this as gentle encouragement to all those who post images of large works in digital format: Make them as big as you can, as sharp and colorful as you can. Post multiple sizes whenever possible, and don’t be afraid to go beyond 1000 or even 2000 pixels. Those of use who love art and have large monitors will thank you for it. Meanwhile, as usual you can click the image above for a (slightly) larger version. 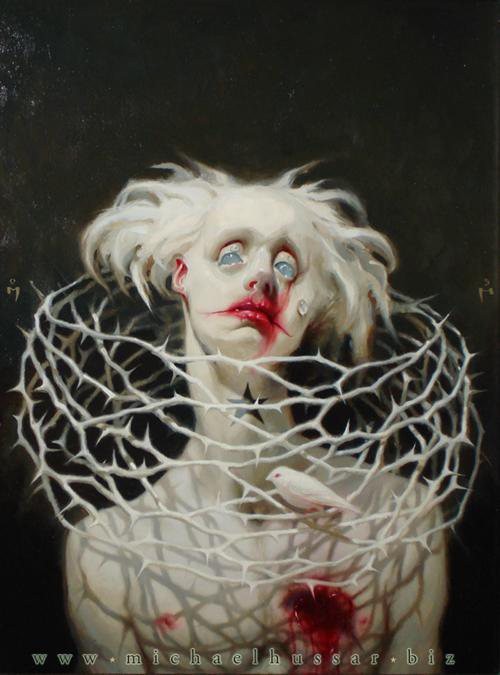 Michael Hussar creates pale figures which look like sideshow acts from a circus of evil zombies. They drip with blood and lipstick, pathos and pride. Shown above: “Flown”. 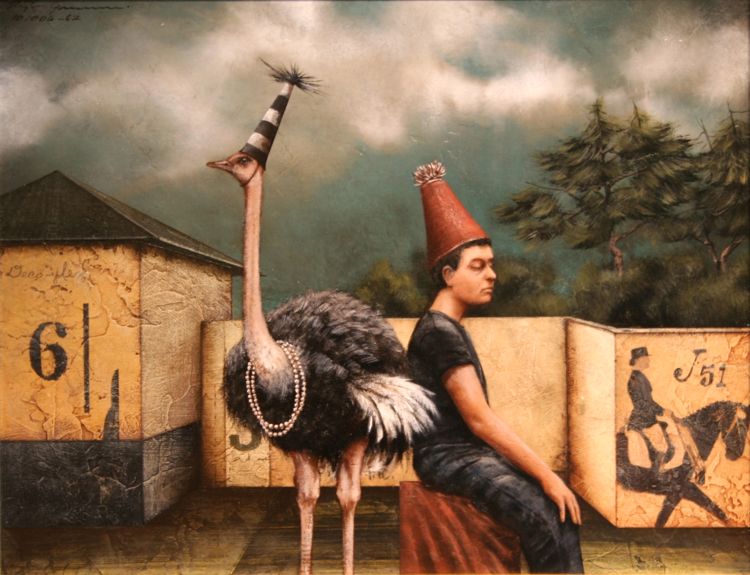